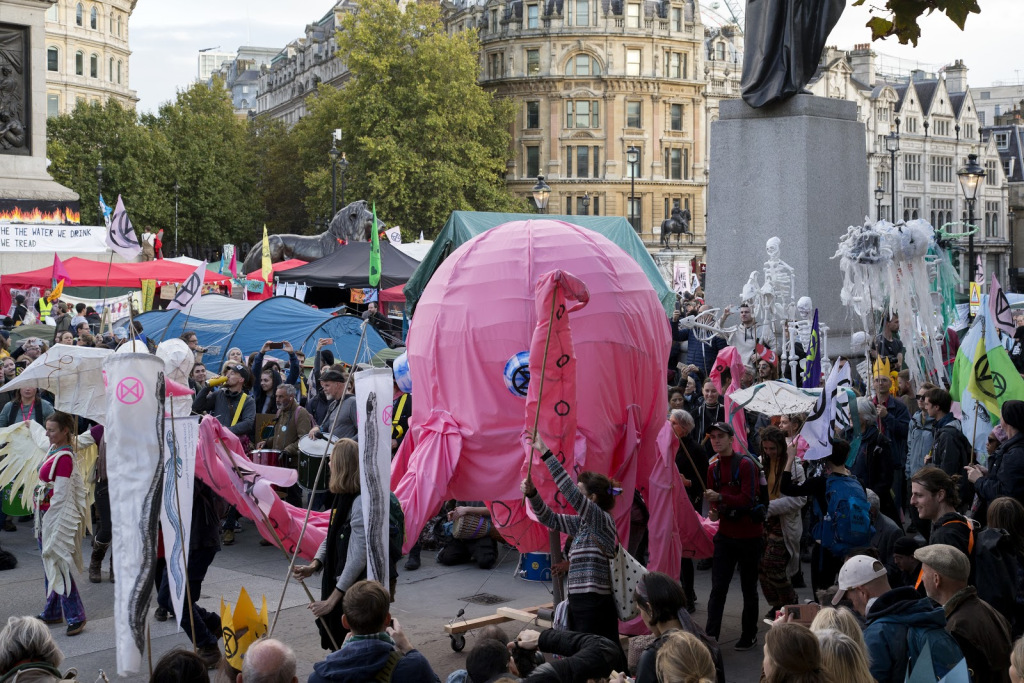 I am in Trafalgar Square, before the police take all the marquees and tents. In the background is a Samba band. Somewhere, a giant octopus is flailing its arms having avoiding being arrested. There is a higgledy piggledy ram-shackle collection of large gazebos and small marquees where all manner of things are happening: leafleting, wellbeing, family space. Scientists for XR are talking to anyone interested in listening.

In the road, there is a complex wooden structure with lots of people locked on or glued on so that the road is closed. For the moment the police are tolerating it. There are people coming to and fro, making sure those locked on are as comfortable as possible and have what they need. In the road two young women are dancing with hula hoops. By the road there is a panel of three women speaking.

One women is a medic; she has worked in so called developing countries where people are being directly affected by climate change. She talks of the impact on daily lives but also the spirit of resilience and community. She also works in the climate change protest movement here, and has seen a similar spirit. She says she has listened to friends saying that they may not choose to have a child, given what the future holds. She says she has had similar thoughts, but now she feels she could have child because, whatever chaos lies ahead, she believes that there will be such a spirit of connection and resilience for her child to grow up in.

I find it profoundly moving that women are having these conversations (it reminded me of conversations we had at the height of the cold war, which is also the last time I was arrested). Is this world a fit place to bring a child into?

I feel the profound sadness that this question is self-inflicted, but even more moving is the woman’s answer – that the human spirit, our connection and resilience is something to welcome a child into, whatever lies ahead.

I have to go before I hear the other women speak. But for a minute, perched on the edge of a wooden tower to which people were locked, I weep quietly, surrounded by the most loving churn of humanity you could imagine. I weep because I allow myself a glimpse of the terrible, careless, casual harm we are doing, but also our awesome care.

How ironic that the huge climatic-environmental-ecological turmoil and the spirit of resistance, community, and connection all arise from within us humans. 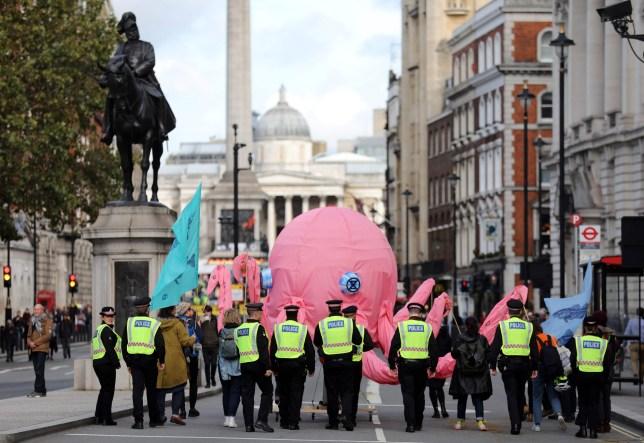 XR’s giant pink octopus is hemmed in by the police