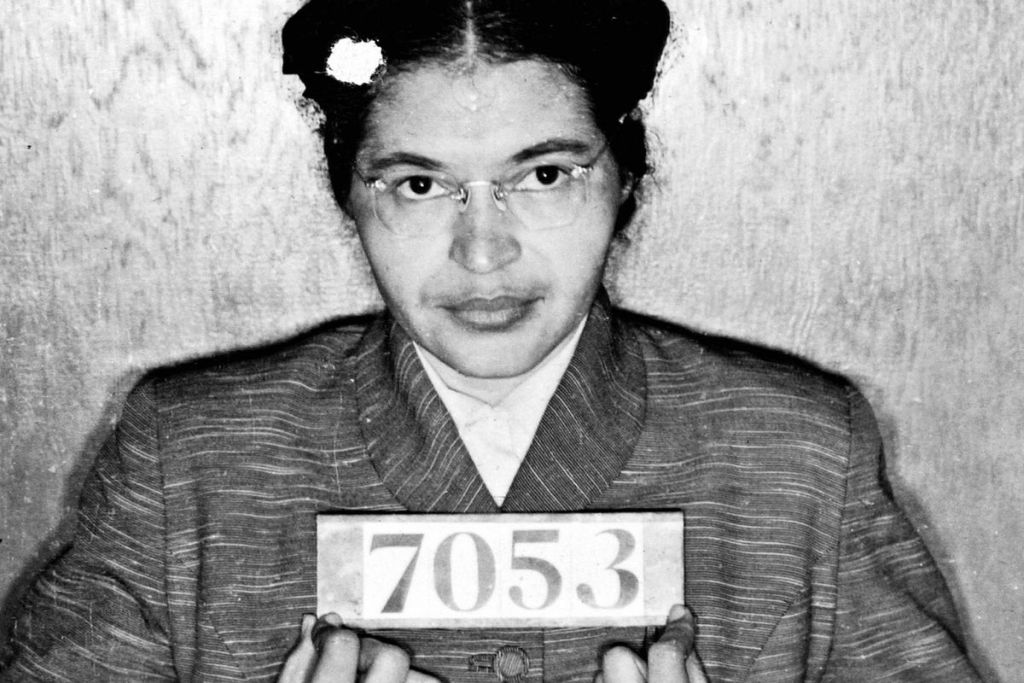 The media is shaming XR because of our demographics. Whilst this is partially a distraction technique from talking about the climate crisis, it is simultaneously a very real issue. We must always seek to tell the truth. One way we in XR York should do this is through educating ourselves on institutionalised racism within the UK. Oh yeah, and no comparing of arrestees to Rosa Parks. 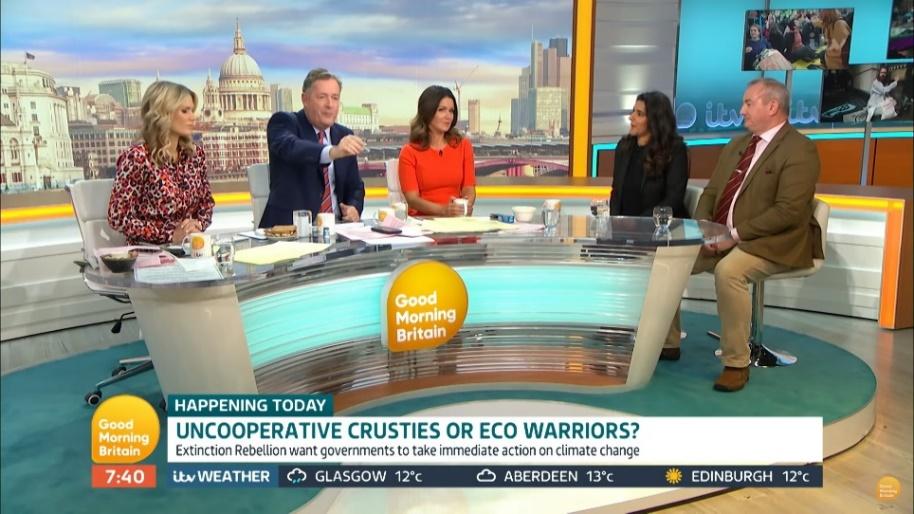 The October Rebellion was amazing to be a part of. But the emotional highs and lows have continued even in hindsight. In moments of burn-out induced self-doubt, while in a clawing search for all XR related news, I did something terrible: I fell into a YouTube rabbit hole of Piers Morgan debates on Good Morning Britain.

As to be expected, Morgan plays a strong role in the media mud-slinging of XR. For example, claiming that we’re all hypocrites if we own TVs. Obviously, this is a distraction tool being used to avoid talking about the real issue.

But then I went on to browse The Telegraph. Whatever your political views outside of this movement, and XR is wholeheartedly beyond politics, remember that The Telegraph has espoused a lot of hatred towards Extinction Rebellion. 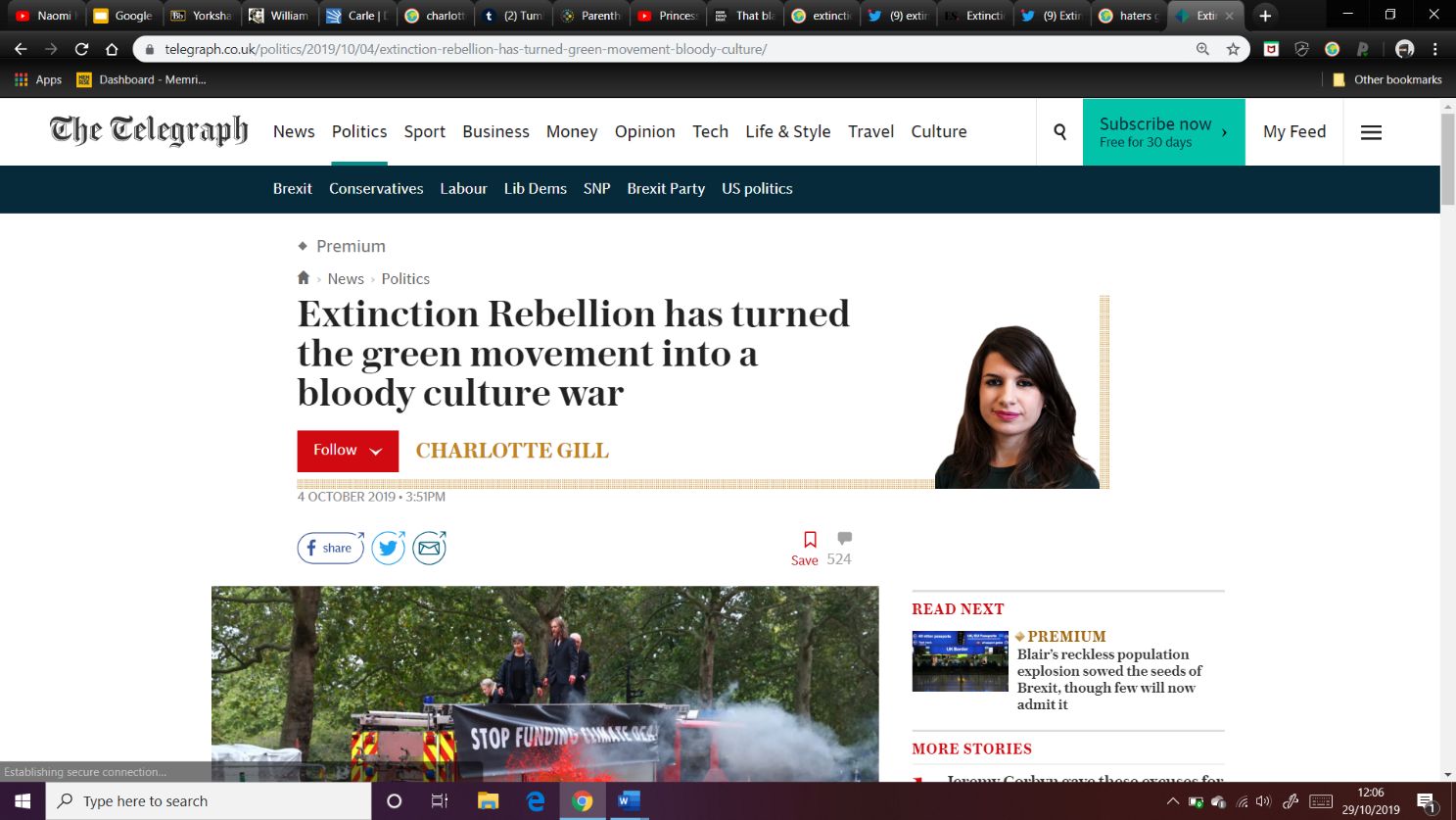 One of Charlotte Gill’s scathing articles for the Telegraph

Telegraph writer Charlotte Gill has written three articles to date on XR, one entitled ‘Extinction Rebellion has turned the green movement into a bloody culture war’. Dated from the 4th of October, Gill discusses the fire engine with fake blood, scathingly critical of XR’s methods, our inability to consider the working class and the lack of diversity within the movement.

To which I say: Gill, you’re correct.

Let’s talk solely about XR UK for a minute. I especially find this difficult to do as I have always seen XR as an international movement. Personally, the greatest comfort I held onto whilst being held at Charing Cross Police Station was the feeling that I was, in some faintly cyclical way, continuing to voice the cause of the 164 climate activists that have been murdered in South America in the last two decades. In the UK, there is no history of eco-protestors being killed by police. As such, having the freedom to defy the government over this global concern was like exercising a democratic duty.

But in XR UK, it has been noted by The Guardian that ‘nine in 10 of the 1,100 activists arrested in the group’s April protests in London were white –a city in which four in 10 residents are not’. It has been acknowledged by political figures as conservative as Theresa May that, “If you’re black, you’re treated more harshly by the criminal justice system than if you’re white.”

Another article by The Guardian, reviewing a government-issues report, showed that for every 100 white women handed custodial sentences at crown courts for drug offences, 227 black women were sentenced to custody. Clearly, anyone going through the XR arrest process or who faces charges will most likely have different experiences due to race.

Julie Forgan, a member of XR York and also Stand up to Racism, finds it ‘appalling’ that a bouquet of flowers was sent to Brixton Police Station with the note ‘thank you for the professionalism’ from XR protestors. I completely agree. Not every police officer is racist. But The Telegraph’s Gill would back socialist Forgan, because this action comes from a citizen completely ignorant of the UK establishment’s institutional racism.

Extinction Rebellion is a cross-generational, mostly white movement. Not all its members could fully explain what institutional racism means. It’s not a phrase you hear often – it was never on the school curriculum, it’s not something many would bring up casually in conversation. Like most problems in society, I blame this on a lack of education. The good news, though, is that XR has a multitude of forums and opportunities based around educating ourselves.

One way I propose we acknowledge our ‘white privilege’ (a term that is also relevant to XR and ought to be clarified) is through introducing a history section within NVDA training. This could be a more thorough overview on how political prisoners – past, present, nationally and internationally – face far more dangerous consequences. Then, we should be careful not to glamourise rebel actions by putting ourselves in the same bracket as those we aspire to be like. Hopefully a measure similar to this could help XR avoid an offensive tweet like the above.

Our bravery is nowhere near tantamount to Rosa Parks. Parks made her stand four days after learning the murderers of Emmitt Till had been acquitted. The murder of black Americans by police was fully normalised at the time and remains an issue today, as shown by the global protests for #BlackLivesMatter in 2016. There are many in XR who don’t fit the white, middle-class mould. In NVDA training, we acknowledge that experience with the police can become more dangerous according to your ‘traits’ – such as ethnicity and sexual orientation. But for those of us who do fit the media perception of a white, middle-class protestor, we need to think about the ‘culture war’ incitement that we’re being slammed with. Then we need to go out of our way to be seen not to be doing that. We need to acknowledge our white privilege more openly, more thoroughly. Whilst we act on behalf of life, be mindful that we’re not really risking ours.

In fact, almost every officer who spoke to me during the arrest process told me that the majority of the force were behind our movement. This is a vastly different social context to so many other protests around the world who we act in solidarity with. And it is a vastly different social context to the civil rights campaign in America, the Indian independence movement and the suffragettes who we casually aspire to be, but who risked their physical well-being with every action. I’m not saying to not take inspiration from their daring. But in order to avoid another twitter firestorm or, more importantly, the alienation of black and ethnic minority people in this country, we need to make individual and group efforts to re-educate ourselves.

Everything we do in XR is to grab the spotlight for our demands and our cause – to keep the conversation rolling forward. Well, we’ve got the spotlight now. What would not be wise would be to tune our critics out. Through self-doubt comes self-reflection. XR’s missing education around different cultural experiences seems alienating towards black and ethnic minority rebels. Clearly, it’s also off-putting to would-be rebels who care deeply about these social issues. If we want change, we need everybody now.