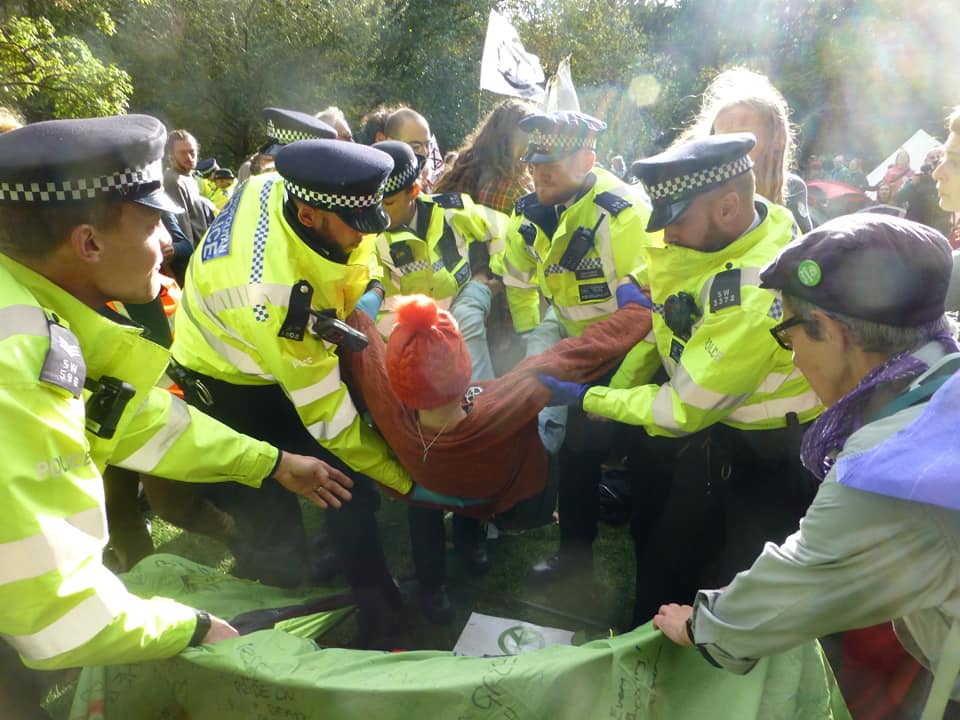 Laura Cox explores one of Extinction Rebellion's most well known acronyms, NVDA, and the motivation behind using non-violent tactics.

Inspired by grassroots activist movements and the fight for climate justice, Extinction Rebellion (XR) was born in May 2018. Like many of the like-minded organisations before it, XR favours a strategy of peaceful disruption. Within the movement, this is referred to as Non-Violent Direct Action (NVDA). But what do we mean when we talk about NVDA, and why do we use it?

Non-Violent Direct Action is a term used to describe protest techniques that go beyond institutionalised conflict procedures such as law courts, signing petitions, and voting. Also referred to as ‘civil resistance’, ‘civil disobedience’, ‘satyagraha’, ‘nonviolent resistance’, ‘direct action’, and ‘pacifica militancia’, NVDA tactics are methods of protest and noncooperation that don’t harm others.

The leading researcher in the field, Gene Sharp, offers this definition in Social Power and Political Freedom:

“Non-violent action refers to those methods of protest, resistance, and intervention without physical violence in which the members of the nonviolent group do, or refuse to do, certain things. They may commit acts of omission – refuse to perform acts which they usually perform, are expected by custom to perform, or are required by law or regulation to perform; or acts of commission – perform acts which they usually do not perform, are not expected by custom to perform, or are forbidden by law or regulation from performing; or a combination of both.”

In Unarmed Insurrections: People Power Movements in Nondemocracies, socialist Kurt Schock explains NVDA as “an active process of bringing political, economic, social, emotional, or moral pressure to bear in the wielding of power in contentious interactions between collective actors. Non-violent action is non-institutional, that is, it operates outside the bounds of institutionalised political channels. Non-violent action may be understood as (…) different from both violent and institutional politics.”

When discussing non-violence, we first need to understand violence. Political scientist Mulford Sibley suggests that violence can be viewed as ‘injurious force’ that excludes ‘structural violence’ of discrimination, poverty, and other violations of human rights. Violence is perhaps most usefully understood as the immediate application of psychological and physical force to other people. It is committed against someone rather than something.

Following this clarification, we can discuss ‘Direct Action’, which is arguably the simpler part of the equation. Existing mechanisms of state participation like voting in elections, lobbying and negotiation are not classed as direct action. As Schock writes, it operates outside of the bounds of institutionalised political channels.

When taking part in direct action, actors use their power to achieve certain goals or to expose problems in traditional institutions. Direct action seeks to actively agitate, and while it may include violence, this is not the method used by XR.

In a nutshell, Non-Violent Direct Action is geared towards stopping, slowing or interfering with business as usual.

NVDA can range from low to high risk tactics; the full scope of which were demonstrated at this month’s International Rebellion. Strategic illegal actions have been a crucial element in many successful environmental campaigns. Members of XR York were arrested for low intensity disruption like blocking roads, as well as ‘spikier’ actions such as ‘locking on’ and ‘gluing on’. The visually captivating, silent processions of the Red Rebel Brigade may also be described as NVDA.

Red Rebels at the International Rebellion

By nature, NVDA tactics are subversive and often conflict with the law. Not all NVDA involvement will lead to conflict with the authorities – like joining the Red Rebels. The aim of NVDA is to agitate and disrupt in the least harmful and violent way. The list of tactics is flexible, and constantly growing.

Within XR, individuals can carry out NVDA on their own, but are encouraged to join Affinity Groups. An Affinity Group is usually made up of people that know and support each other. One of the driving principles behind their formation is the range of different skills and roles. For example, as well as arrestable rebels (also known as ‘conscientious objectors’) it is advised that groups have a wellbeing presence, a media presence, and a legal observer to record an unbiased account of the action. In XR, NVDA ideally takes place within a familiar support system.

Activists choose to use NVDA because they want to exercise civil disobedience without causing harm to others. NVDA tactics are also particularly good at generating public awareness because they are disruptive by nature. They are often visual and attention grabbing.

In a year and a half, XR has succeeded where other environmental groups have not in pushing the climate emergency into mainstream consciousness. Existing state mechanisms for protest and expression have failed to communicate the severity of ecological breakdown. The intensity of feeling behind the climate movement can no longer be penned in a petition.

NVDA therefore provides an alternative to state-controlled, politically mediated methods of exercising public opinion. It is grounded in a rational, peaceful strategy that refuses to comply with toxic systems.

Before carrying out NVDA, rebels are advised to attend NVDA training sessions in order to prepare for what are often physically and emotionally demanding situations. The training shows rebels how to use de-escalation techniques, interact with the police, and understand the court process. It is run by people who have been arrested and who can speak from first hand experience.

As well as regular training, XR’s call for NVDA is supported by the active pursuit of a regenerative culture. In the words of Molly Griffith-Jones, one of York’s Regenerative Culture Working Group co-ordinators, “you can’t have an organisation where people engage in arrestable actions without having a framework for meeting their emotional needs.”

Emotional support is encouraged by the formation of Affinity Groups, which aim to keep activists safe and supported. Logistical and financial help is also available. The development of strong arrestee support is crucial both before, during, and after the action. Going forward, XR must continue to place regenerative culture at the heart of its call for NVDA.

< A Moment From The Rebellion Parenting and Activism >