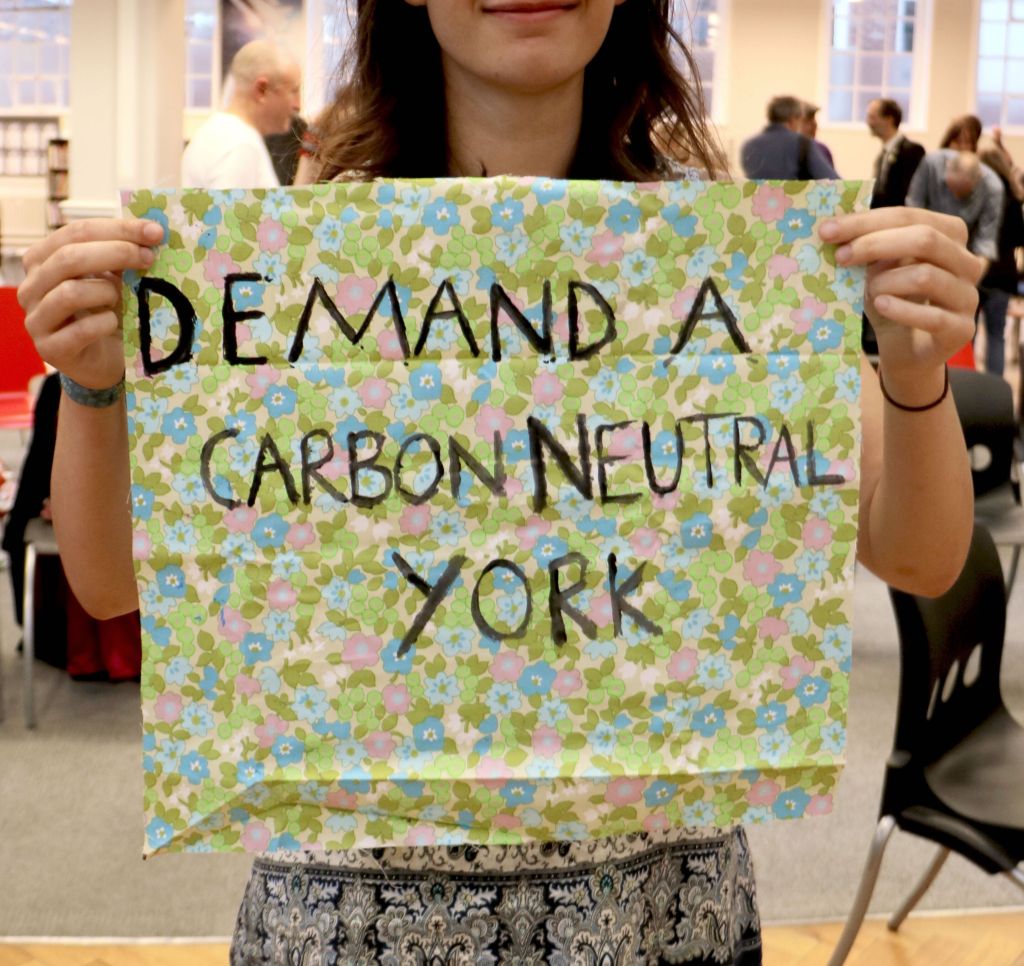 On the 21st of June, Extinction Rebellion York hosted the first ever People's Assembly to address climate change in the city.

Bringing the community together to tackle climate change

On the 21st of June, Extinction Rebellion York hosted the first ever People’s Assembly to address climate change in the city. Held at York Explore Library, Demand A Future: Night Forum On Climate Emergency brought local groups and individuals together to discuss the most important issue facing our world today: climate emergency.

The first event of its kind, Demand A Future challenged guests to think about climate change and the environmental emergency in an entirely new way. Instead of locking decision-makers into a stuffy office, the event invited people from across the local community to share their skills, experience, ideas, and a meal in the civic heart of the city.

The event – free of charge to all – kicked off at 4pm with a mix of informative talks, arts projects, storytelling, and musical entertainment. Many of the activities took place in the library gardens in the long awaited sun. A number of participating organisations including Friends of the Earth, York Interfaith Group, Edible York, and York St Saviourgate Unitarian Chapel hosted stalls in the garden, where guests could find out more about their environmental work. Following this, a communal potluck dinner was shared between all attendees.

“I really liked the storytelling and bee making,” said Phoebe, aged 10. “I liked everyone coming together. Climate change effects everyone – if I have children, and my children have children, there won’t be as much wildlife for them.”

During the People’s Assembly, attendees were invited to join one of six discussion groups: energy, food, economy, housing, environment, and movements. Within each category, guests considered how local developments in their chosen area could respond to the climate emergency.

Each focus group put forward three key points which were then shared to the entire Assembly. Using a series of ‘temperature checks’, in which levels of agreement are shown by waving the hands towards the sky or to the ground, individuals cast their votes on whether the points should be added to a written mandate. During the session, guests were able to make new suggestions which were also given temperature checks. Key areas of discussion included free public transport in the city centre, the need for new residential buildings to meet passive house standards, reforesting efforts, and the argument that environmental initiatives should go beyond carbon neutrality and become carbon negative.

“[I was] hoping that XRYork’s Night Forum on Climate Emergency would be worth the five hours or so… And it was absolutely that, and more,” wrote Cllr Kallum Taylor, one of the city councillors present at the event, in a Twitter post. “To have so many people there, and so engaged, on a Friday evening, was incredible.”

After the Assembly, XRYork invited guests to stay for a relaxed evening of music, theatre, and poetry, featuring Nordic folk band Bruni, an open air theatre piece by Destruction and Beauty, and poets from Say Owt, The Spoken Word, and BeSpeak.

While many of the topics discussed in the assembly were highly ambitious, big problems can only be solved by big thinking. Demand A Future gave guests a forum for their ideas to be heard and discussed without the red tape that so often strangles bureaucracy.

All points raised during the People’s Assembly are currently being compiled into a final document that will be presented to councillors on the 27th of June before the next executive council meeting. We will meet at 4.30pm at Museum Gardens, and process to the council offices where councillors will be invited to accept the mandate.

A precedent for change

Demand A Future‘s success rested upon a strong community spirit, and true democratic mechanisms. We can’t face the climate challenge alone – working together and combining our skills is critical. If we can do so in a creative space where ideas are heard and celebrated, the solutions we come up with will be far more meaningful.

In the words of XRYork’s Head Coordinator Merry Dickinson, “We can’t just have words any more… We need action.”