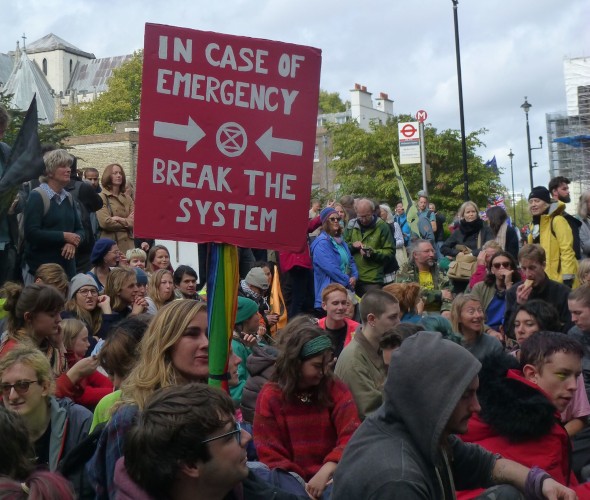 Laura Cox writes about her recent experience at International Rebellion and the importance of challenging the culture surrounding climate activist arrests.

At 3.40pm on the 7th of October, I was bundled into a police van and taken to Croydon Custody Centre.

Why? The short answer: wilful obstruction of a highway. Specifically, sitting in an orange tent in front of a line of police officers as they advanced down Millbank, the Northern site of the International Rebellion.

Getting arrested was something I wanted to do, to stand up and be counted for Extinction Rebellion’s aims. The movement calls for mass arrest tactics. In my mind, if there’s anything worth getting dragged into a police van for, then it’s pressuring the government to address the climate emergency.

I’d had Non-Violent Direct Action (NVDA) training. I’d spoken at length with people who had been arrested already. I was as prepared as I could possibly be. And I was tired of adding my name to petitions and watching the blatant greenwashing campaigns spewed out by public and private companies alike.

As consumers, we have purchasing power, but this only goes so far. Our civic power, as citizens, is also severely limited. Yes, we can vote and we have relative freedom of speech. But forcing an inactive government to make real, tangible changes to reverse the damage we have done to the planet… Well, the science doesn’t lie. Look at any climate statistics and the message is the same.

From petition to protest

The time for petitions is long past – we’ve seen time and time again that they just don’t work. What Extinction Rebellion is doing right now, and what it will continue to do, simply can’t be ignored. This is the point of mass peaceful protest and Non-Violent Direct Action – to act in solidarity, in peace, and expose our flawed system.

One of the most common criticisms of Extinction Rebellion protestors is that we are wasting police time. It’s not us that’s wasting their time – it’s the institution that employs them. The police should not be spending their time arresting climate activists – that’s something we can all agree on. Instead, law enforcement should be supporting the movement, because it’s in the interests of every single person living on planet Earth. It highlights just how broken the system is when the collapse of our environment isn’t the number one item on the agenda.

It saddens me that the most we can do as citizens is chain and glue ourselves to things, or refuse to move out of the way. It’s even more telling that, when we are pushed to relative extremes to be heard, we are swept into vans and locked up. Police brutality is certainly much less of a problem in the UK than elsewhere, but as the International Rebellion continues we can expect to see more institutionalised violence and cruelty. The system doesn’t have an effective response for NVDA, which is why it is so powerful. It challenges the government on an intellectual level and exposes the flaws in how the country is run (or not, as the case may be).

One of the most upsetting photographs I’ve seen from the Rebellion is the confiscation of a wheelchair. There is something seriously wrong when the institution turns from preserving citizens’ rights to making it impossible for them to participate in civil disobedience… Let alone when those citizens can’t walk unaided. The wheelchair is incredibly symbolic: the state will take everything they can from us before they accept they need to change.

Confiscated items, including a wheelchair

Another of the reasons why I was arrested is because, unlike so many others, I could. Those with certain jobs, physical ailments, dependents, and other responsibilities can’t risk arrest. I don’t have a DBS record to keep clean or a pet to feed. I wanted to make sure that as many names were added to the list of arrestees as possible – not just for my own reasons, but for the people who would be arrested if they were able.

The elephant in the cell

In Extinction Rebellion, we have developed a complicated relationship with arrest. Instead of something to avoid, getting arrested in the name of climate justice has become almost desirable. It has become a ‘badge of honour’, a way to prove that you’re fully committed to the environment and standing up to the toxic system. This has got to change. Getting arrested shouldn’t be taboo, but it shouldn’t be glamorised either. Going forward, this is one of the most important conversations we need to have both inside and outside of the movement.

All in all, I would describe my arrestee experience as positive. While getting arrested isn’t something I would recommend, the unwavering support of XR York and XR in general meant that I never felt worried or alone. If that doesn’t demonstrate a healthy and regenerative culture, then I don’t know what does.

If you’d like to support XR York’s arrestees, please donate to our arrestee support fund.

< Beyond The Arrests: Fuelling The Rebellion Rebel Uprising Borth >