Demand A Future – A Perspective by Eve Branston, Co-Ordinator of York’s Pagan Group 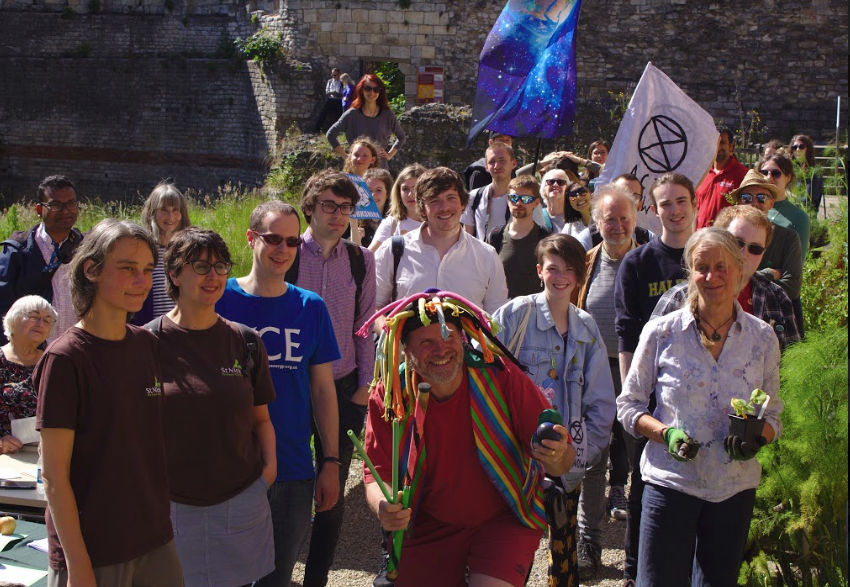 Like lots of people, when I first heard the name “Extinction Rebellion”, I thought: no thanks. Sounds morbid! And scary. Who chose that name, anyway? And then – maybe like lots of people – the name gradually sank into my consciousness as a necessary name for a necessary cause, and a name that sticks in the memory. We need that… Because it describes a situation that sticks in the throat. The challenges to our survival.

I was delighted to arrive at the recent Extinction Rebellion York event, ‘Demand A Future’ in York’s Central Library on June 21st, the Summer Solstice: the the longest day of light – a fitting date for a meeting that worked with the blessed energy of hope. And by the time I left, at about 11pm, I was truly excited!

I hadn’t been quite sure what to expect, but I soon got the picture. First, the fun-in-the-sun, positive-energy-generating events (thanks, sun, for actually shining!). I liked the happy people strolling around outside, offering, reading and discussing information aimed at improving the world: Greenpeace and Friends of the Earth; St Nick’s Environment Centre; XR itself; York Interfaith Group; and lots more. There was groovy face-painting, childrens’ entertainment, cheery singing, and music echoing in the historic old hospitium next to the Library.

Then, into the Library for the People’s Assembly. As hundreds of people began to pull chairs into the huge, cleared, central space, a hush fell. Here was the beautiful seriousness of the traditional village hall, addressing a common threat. The tribal gathering in a central hut; the ancient Roman Forum; the pivotal pow-wow. This was true Magic. I felt vibrations of power, individual and group, held here and expanding minute by minute – and, with them, my own positivity.

I loved the ingenuity of it all. First, excellent talks by informed individuals on relevant subjects. Then, we were asked to divide into about 10 mini-forums, dotted around the Library, each with a broad focus: Environment, Finance, Housing, Food, Transport, and Movement. Each group debated and chose (with the help of nifty hand signals!) 3 ‘sub-mandates’ to be brought back to the group.

All the ideas were dropped into the pot of the big, delicious nutritious stew of the Mandate: the people of York’s wishes for the measures necessary to make this city carbon-free by 2030, to be presented to the Council the following week.

The evening was rounded off with the release of energy that beautiful music, dance and creative words provide so well. It ended around 11pm with much tidying and cleaning, re-sorting of furniture and gathering up of pieces of paper, hugging and thanking and smiling and adieu-ing.

I got home on a zippy high of refreshed optimism. What creativity and inspired proactivity I had witnessed! And everywhere, friendly, kind people, smiling, networking and weaving the web of energy. Literally people power. I felt I’d seen truly civilised human behaviour: and a very satisfactory force for good.

The event inspired me to say this: I love life. I would like to LIVE, please. And in peace, health and ease. I know there is hope that we can improve things. People are really pulling together now and the energy of awareness and action is rising. This is good. We can do it. I know we can. May the loving momentum generated by groups like XR be like clean water churning and leaping over a waterfall, and encourage us in our continuing work.

This article was contributed by Eve Branston, co-ordinator of Kith of the Earthen Star, York’s Pagan Group.

< Demand A Future – York’s First People’s Assembly On Climate Emergency Poem: Black as the Ace of Spades by Sarah-Jayne Mackenzie >