Getting Ready For The International Rebellion 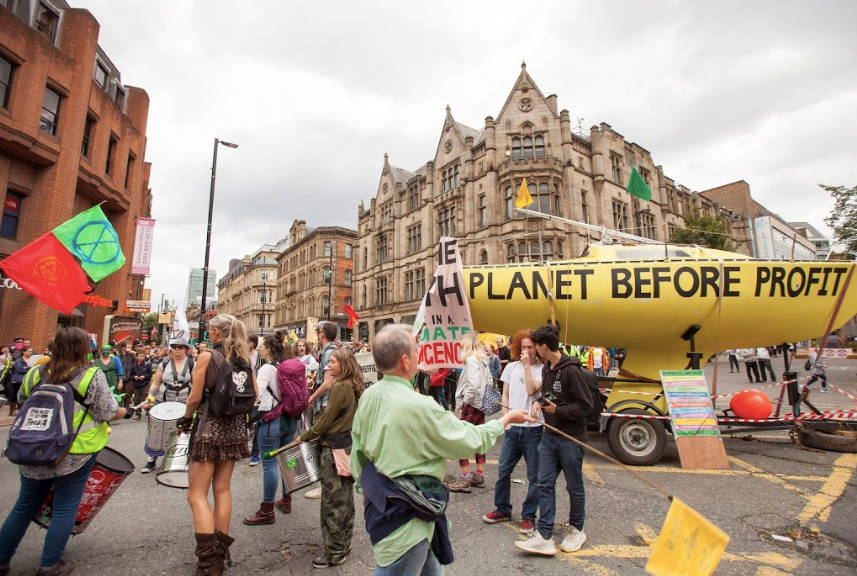 XRYork Media Coordinator Laura Cox explains the why, what, where, and how of the upcoming International Rebellion

In April and July, Extinction Rebellion staged mass protests which brought the climate catastrophe to the fore. A period of dedicated disruption forced the authorities, the public, and businesses to acknowledge XR’s demands, and showed just how far rebels were willing to go to fight against environmental and ecological breakdown.

Up until now, the UK government has issued a 2050 net-zero carbon emissions target, and pledged to hold a People’s Assembly for climate justice. Politicians are finally starting to voice the need to address climate change and global heating… But, so far, it’s all been hot air.

Starting on the 7th of October, XR rebels from across the country will join in solidarity to force government departments to come up with tangible, actionable responses to the climate emergency. The International Rebellion will bombard the government with mass participation civil disobedience and non-violent action, all in the name of climate justice and a habitable future world.

Amongst a foray of political mishaps and futile debate, the International Rebellion will see XR groups and supporters shut down the main routes into Westminster: the heart of UK governance. The Rebellion will be organised via 12 regional sites, each with a particular theme. XRYork will be part of the Rewilded North site, with the theme of ‘Northern forest’. The speakers, sessions, and workshops taking place at the sites will reflect each region’s diversity and explore some of the issues most prominent in the area. There will be spaces for camping, kitchens, performances, workshops, and more – all organised by XR volunteers. Similar occupations will happen in more than 60 global cities.

Taking part in the Rebellion

Rebels can join “affinity groups” – small groups of individuals working together – and arrange arrestable actions, but there are many more ways to make the Rebellion a success. This could be as simple as turning up, bringing along some friends, or posting a photo on social media.

In the run up to the Rebellion, XR is looking to fill a number of organising roles including stage managers, hosts, programmers, stewards, wellbeing officers, and kitchen staff. On each site, there will be performance slots for speakers, bands, comedians, singers, theatre groups and other acts. To find out more about how you can apply for these roles, contact xryork@gmail.com.

While not everyone will be able to make it to London, supporters can help by sharing photos and videos, developing arrestee support networks at their home chapters, organising satellite actions in their local areas, and donating to a choice of three crowd funders.

To make sure that as many people as possible can join the Rebellion, XR has arranged for coaches to pick up rebels from major cities across the UK. Coaches will leave York at 8am on Sunday the 6th, stopping at Leeds, Doncaster, Sheffield and Nottingham before arriving into London at 5.30pm. Passengers can choose from three different ticket pricing options, paying what they feel is appropriate to their circumstances.

Rebels who aren’t camping on site or staying with friends or family can register for accommodation here. If you do decide to camp, layer up – three-season sleeping bags, blankets, winter clothes, waterproofs, and sturdy footwear are essential.

Following the initial two week push, actions will continue to take place every weekend. These smaller scale demonstrations will aim to build on the momentum of the Rebellion, giving those who couldn’t make it the chance to get involved.

The International Rebellion will give XR rebels and supporters the opportunity to meet others from across the country and learn from the ways in which different regional groups operate. This will help to build connections between local chapters and strengthen the movement as a whole. In the North, this is already underway in the form of XR Yorkshire.

Ultimately, the International Rebellion is about making governments worldwide realise that they will be held to account for their failure to come up with solutions to the biggest challenge facing humanity today: the continued destruction of the planet we all call home.

If you’d like to take part in the International Rebellion but aren’t sure what to expect, central XR will be running a series of webinars, workshops, and planning sessions. You can also read Michael Regen’s first experience of a mass XR rebellion here.