My First Day as a Rebel 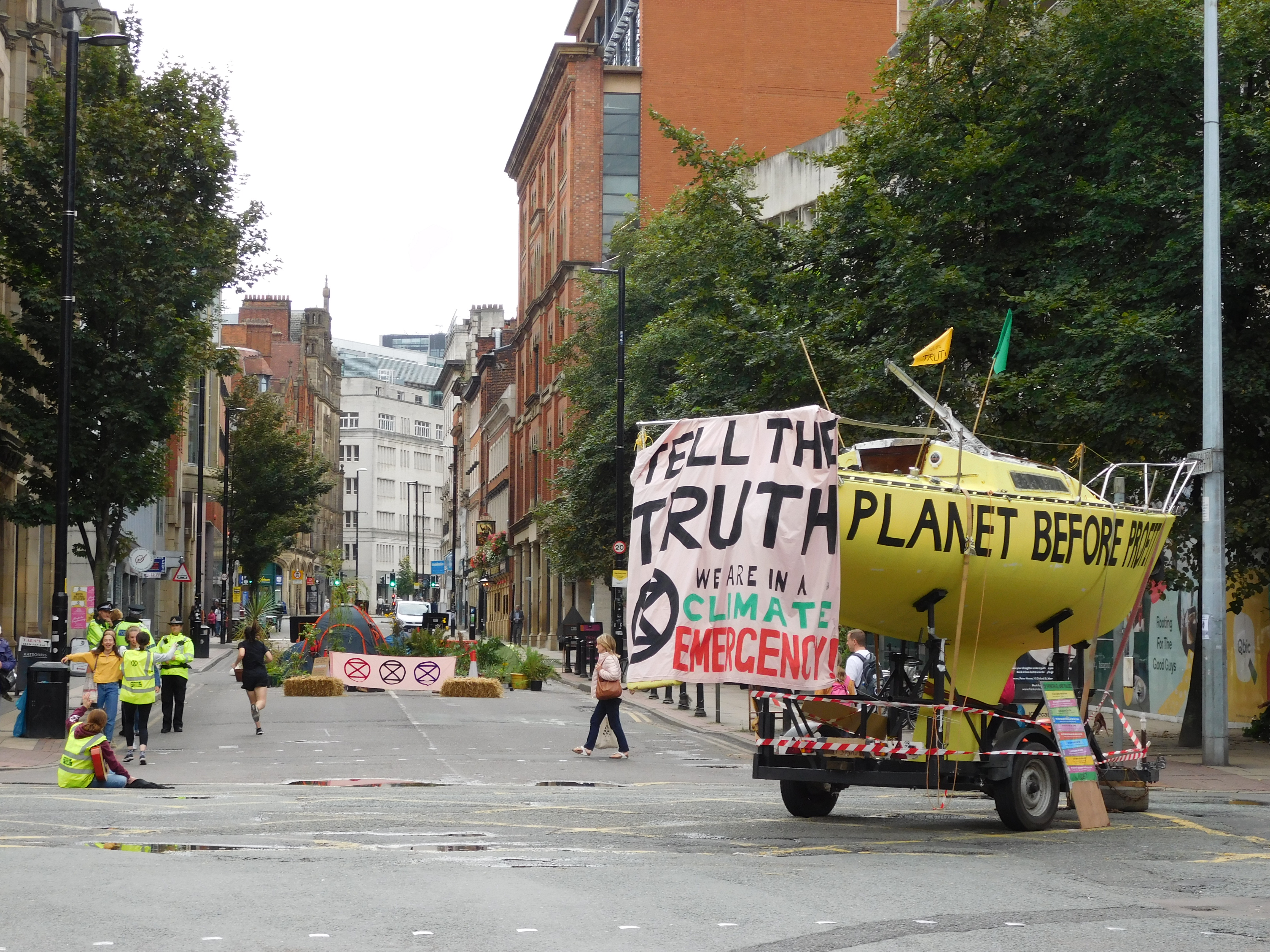 Michael Regan, PhD student at the University of Lancaster, reflects on the closing day of the Northern Rebellion.

I’ve lived in York for just over a year now, but I’m originally from Manchester. So it was special for me to take part in my first piece of activism by returning to the place where I was born and raised. And though it felt strange to come in on the train, knowing that I would have to leave at the end of the day, I began to feel more Mancunian than ever: this is, after all, a city of protests, of protestors, of social, cultural and political rebels.

It was surreal, arriving on Deansgate, to see a big yellow boat sitting where there is normally an endless string of buses, taxis and cars. For veteran rebels I imagine this must have seemed relatively normal. But my perspective, I imagine, will have been closer to those locals who were surprised to see one of their busiest streets shut down to everyone but pedestrians. But what began as a surreal and uncertain experience gradually changed into an optimistic, encouraging vision for the future – as evidenced by the petition (started in the wake of the rebellion) to fully pedestrianise Deansgate.

The Yellow Boat, which spent four days on Deansgate

With other members of XR York, we eventually caught up with the large group of rebels on Great Ancoats Street. I soon felt the adrenalin flowing as we turned the corner to see a number of police cars and bikes, their blue lights flashing, with a long line of traffic being blocked by rebels standing in the road, holding their banner together.

Before I knew it, I was marching along with the rest of the rebels who had gathered by the side of the road, and we were off: singing, chanting, drums banging. It was good to see so many smiling faces, especially after I had frightened myself by focusing on the negative comments on Twitter! It was strange, though, to walk so close to the buses forced to sit at their stops, with one rebel able to shake hands with a sympathetic driver. I tried to say sorry to those stuck on the buses looking angry or confused. Then I wondered if I should feel apologetic. The complex of emotions that many of us are experiencing is still being worked through, it seems.

The day got more surreal for me when, sitting in the road and chatting with other York rebels, I spotted an old school friend walking past with his partner. I went over to say hello, and learned how sceptical they were of it all: of XR’s aims; their tactics; whether things really can change; whether things really need to change, since after all how do they know what the truth on climate change is?

This reinforced for me the importance of Extinction Rebellion and its work, since it is clear how vital our first demand is, written across the banner of those road-blockers at the start of the march in Manchester. But this conversation with my friend was also a great confidence boost, worried as I was about dealing with people who were either unsympathetic or just unsure. I felt myself becoming a rebel.

The model Angel of the North, made from scrap and junk

After taking part in the joyful and uplifting closing ceremony led by XR Manchester, we watched as a model Angel of the North – constructed from scrap and junk, planted through the roof of a stationary car – was carefully lowered. It was to be taken, we were told, to the People’s History Museum, who would accept it as a temporary exhibition. So we set off, the Angel being carried by a group of volunteers, with the car pushed behind it. Heading back to the train station, I worried about what it meant that one of the most eye-catching symbols of the rebellion had gone straight to the museum: was all this to be forgotten, to become history?

But then I remembered the sound of the drums as the march came to a halt at the bottom of Market Street. Covered by a roof which made them even louder, the drums struck a pulsating beat, as if all the energy, emotion and passion from the thousands who came to Manchester that weekend was made audible. No one could forget that, I thought. I know I won’t.

Michael Regan is a PhD student at the University of Lancaster.