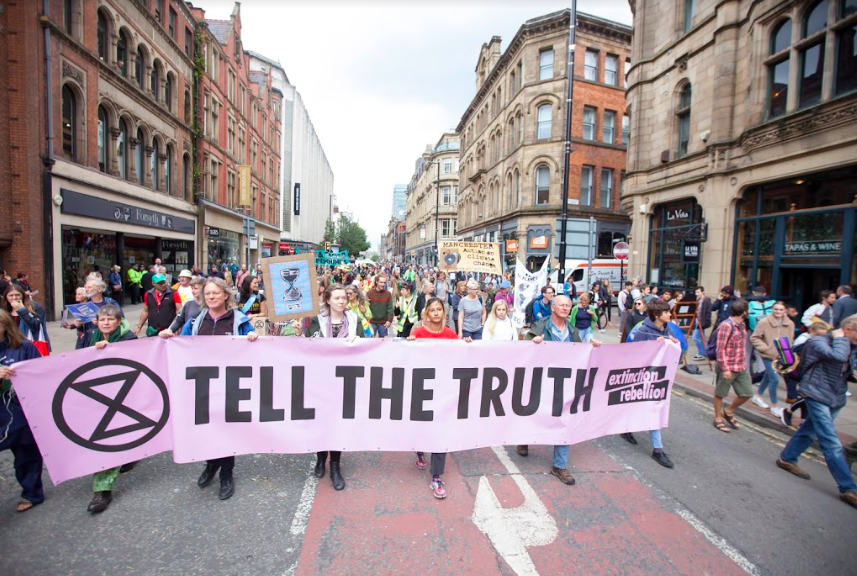 Catherine Love, freelance arts journalist, shares her thoughts after spending a weekend at the Northern Rebellion.

At one end of Deansgate, a towering yellow boat emblazoned with ‘planet before profit’. At the other end, a scaled-down Angel of the North constructed from junk and draped with a banner reading ‘tell the truth’.

These are the visual icons of the Northern Rebellion, a four day occupation of one of Manchester’s busiest, most polluted streets. From the 30th of August to the 2nd of September, Extinction Rebellion peacefully disrupted business as usual in the city, reaching out to the local community with the message that we need to act now on the climate and ecological emergency.

Die-in held outside HSBC at the Northern Rebellion

The Northern Rebellion included a mix of talks, training workshops, music, arts and direct action. On the Friday, much was made in the media of the disruption caused by the roadblocks, but in my experience the event was much less about disrupting the public than it was about reaching out to them. Many people walking down the street were drawn in by what was going on, whether they stopped to get a piece of clothing printed in the arts tent or paused to listen to a talk or music act on the main stage.

While handing out flyers, I had lots of positive conversations with people, most of whom supported what Extinction Rebellion is doing and some of whom were even thinking of joining the movement themselves. On Saturday afternoon, meanwhile, the march against proroguing Parliament noisily converged with the gathering on Deansgate, highlighting the importance of fighting for democracy and using democratic means to act on climate crisis. The crowd shouted out a two-part demand: ‘save the planet, stop the coup’.

A highlight of the weekend for me – and, I suspect, many others – was the talk on Sunday from Julia Steinberger, one of the lead authors of the IPCC’s upcoming report. Despite the pouring rain, quite a crowd huddled round to hear Steinberger talk about the links between climate change and economics. She’s a brilliant communicator who was able to clearly and concisely connect the dots between science, economics and politics. This is exactly the sort of message that we need to be getting across if we want to persuade people of our case and encourage them to take the necessary action.

One of the unexpected side effects of the Northern Rebellion is that it’s boosted the case for a pedestrianised Deansgate. Far from deterring people from the area and negatively impacting local businesses – as scaremongering councillors predicted – the event attracted extra crowds to the street, who appreciated the lack of traffic and fumes. Passers-by commented on how much more pleasant the street was, while online a petition to permanently pedestrianise the area started taking off. This is what Extinction Rebellion is about: not just disrupting business as usual, but testing out alternative models for what our society and culture could look like.

During a workshop on how to talk to the media and general public about climate change, one of the potential questions we were asked to respond to was: “you’re just one person – what can you possibly do about climate change?” (I paraphrase, but that was the gist of it). As far as I’m concerned, this is actually one of the best possible arguments for getting involved with a movement like Extinction Rebellion. Once you join XR you’re no longer just one person – you’re part of a collective. And that’s what the Northern Rebellion, with its focus on collective action and community, powerfully demonstrated.

< Extinction Rebellion: Last Chance to Save the World My First Day as a Rebel >