Extinction Rebellion: Last Chance to Save the World 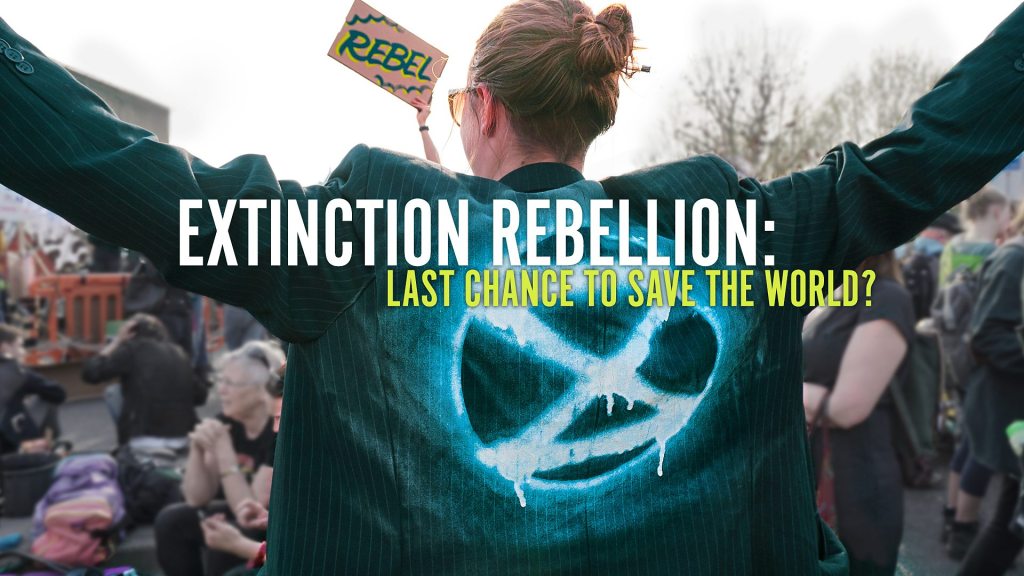 Ben Zand’s documentary Extinction Rebellion: Last Chance to Save the World? shows the build-up to the London climate protests in April 2019. Ben, who spent four months with XR, speaks to a range of different people within the movement, from co-founder Roger Hallam to 11 year old school student Raffi. The film’s appeal, at least to me, is how it is able to intertwine the small scale and the large, mixing as it does the individual stories of those involved in the rebellion with the enormous ambitions, actions and stakes of XR itself. In doing so, the film reminds us of the very human sadness, anger, compassion and conviction – in short, the energy – which drives the movement, something which the mainstream media reports don’t always manage (or wish) to convey.

The film opens in January 2019, beginning a countdown to the April rebellion in London. The action in London, we are told, will be XR’s ‘biggest ever protest’, with the aim of shutting down Central London. Ben asks Roger Hallam, as co-founder of XR and one of the primary coordinators of the April rebellion, how he feels about so many people being prepared to give up their freedom for him; of course, this misunderstands the nature of XR, and in this way the film is equally about Ben’s gradual education in the mechanics of XR as it is about the London rebellion. We see this after Ben leaves Roger, reflecting on their conversation: ‘I just feel like his aims are so unrealistic. Literally, trying to bring about a change in British society that we haven’t seen for about 500 years, and he’s doing it by blocking some roads in London.’

Later, Ben visits Sam, a 22 year old graduate working full time for XR. After joking with Sam about his time under arrest – Sam lead an action where protestors glued themselves to the hotel hosting a conference as part of International Petroleum Week – Ben begins to question what effect the protests will have. As Ben sees it, the key to raising the visibility of XR’s actions involves a significant number of rebels being arrested. However, Ben puts it to Sam that there is a danger in that line of thinking since there are many young people in the movement who are ‘impressionable’ and who may not be seriously considering the impact that being arrested might have on their present and future situations. Sam suggests that Ben is ‘underestimating their intelligence.’

This repeats a kind of twisted logic which was in the air when Ben meets Dani, a 16 year old school striker, as they speak to Dani’s mum: a logic which suggests that these young people are not thinking about the future when they take these actions, when they take these risks. It is precisely because they are concerned for the future that they are involved in XR, it is because their future is compromised that they are willing to act.

On the 15th of March – 30 days from the rebellion – we have the second of two school strikes shown. ‘Oh my God,’ Ben says, ‘that’s a lot of kids!’ Sam is here again, along with 11 year old Raffi, who is part of a group of young students whose aim is to deliver a letter to Claire Perry MP, at that time a Minister of State at the Department for Business, Energy and Industrial Strategy. When asked why he is there, Raffi says that ‘this is kind of our World War Three.’ You can feel the energy of the protest, and Ben almost gets caught in the eye by a placard waving in the air. Ben, who by this point seems more sympathetic to XR, says to a mounted policeman that ‘these are kids.’ The reply is that ‘they should be in school.’ I think we can all agree – including the students themselves – that yes, they should be in school. That they are not only emphasises the shameful inactivity of our governments and institutions.

Seven days from the rebellion, and Ben is now in the offices of XR. He sits down for another chat with Roger, which starts innocuously enough: Roger has just started on a banana, Ben is sipping a cup of tea. Soon they begin an intense, thought-provoking debate over exactly what XR is, what its aims are, and the struggle it is involved in. As ever, Ben is looking ahead and wondering what comes next should the London rebellion fail to achieve XR’s demands. He suggests that the protests can only get more dramatic, to which Roger replies: ‘Oh, we’re going into the most dramatic episode in human history. It’s gonna be quite a ride.’

With that, we arrive at last at the rebellion on the 15th of April. And what a ride it is. Music, dancing, road blocks, energy, gluing, trucks, rage, boats, singing, sitting, shouting, compassion. On Day 4, Ben is at Oxford Circus, which has been completely shut down by XR protestors. He notes how it takes six people to arrest one person, meaning the process of clearing the site is, from the Met’s perspective, painfully slow. His suggestion that ‘Extinction Rebellion might win’ seems a long way from his early scepticism at the start of the year. And now, the sight of skateboard ramps in the middle of the road on Waterloo Bridge is slightly surreal. Things that would have seemed impossible at one stage now seem to be happening around every corner. Might this give XR hope every time a critic or sceptic suggests that what they want is unreasonable or unobtainable?

After an inconclusive meeting with Claire Perry MP, the film draws to a close with the bare facts: the rebellion lasted an unprecedented eleven days, and over a thousand arrests were made. However, what I am left with is not just the human stories behind the XR movement, but the impact the rebellion has made on other people.

Of course, there were many Londoners who felt negatively affected by the protests, and these voices were heard in the film. But, as Ben points out in his closing remarks, reflecting on the speech given by Greta Thunberg at Marble Arch at the end of the rebellion, is that he is amazed at ‘how much the public have got behind Extinction Rebellion.’ It’s funny to think how dismissive he was, in that first discussion with Roger, of the potential for XR to help change society’s attitude towards the issues – and how to go about tackling them. One must hope that Ben is not the last person to undergo such a transformation.

Extinction Rebellion: Last Chance to Save the World? (44 mins) was first broadcast on the 17th of July 2019 on BBC One.

Michael Regan is a PhD student at the University of Lancaster.

< The Wind in their Sails: XR and Young People Northern Rebellion: Celebrating Climate Activism In Manchester >